Teen Killed After Being Pulled Into Wood Chipper

Mason Scott Cox was pulled into the wood chipper around 1 p.m. local time Saturday on Hawthorne Road while trying to kick a tree limb into the machine, police said. It was his first day on the job in Gastonia, North Carolina.

The business owner and other workers were there and noticed the machine was having trouble. By the time owner Jon Crawford realized what was happening and hit the kill switch, it was too late. 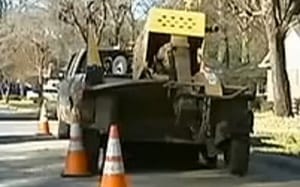 Kings Mountain Police said they believe the death was accidental and no foul play was involved. Cox was found inside the wood chipper and pronounced dead on scene, officials say.

Cox’s mother, Debra Sisk spoke to WBTV. “It was his first day on this job. He was trying to find work and he had been putting in applications,” Sisk explained. “I just started screaming when I found out how he died. It’s bad enough that’s he’s gone,” she said.

Things Not to Do with a Bear Trap, Stick Your Hand in It