An American surfer survived a fierce crocodile attack at a popular Costa Rican beach, thanks to the brave actions of his roommate. The details of the story have been “wildly inaccurate”, so Stab Magazine sought to get answers and an exclusive story. Their story is below.

WARNING: VERY GRAPHIC IMAGES are contained in this story.

At 7am, in Tamarindo last Friday, Arthur ‘Jon’ Becker lost his right leg during a crocodile attack. For the most part, reports following the incident have been hazy and incomplete. “Details have been wildly inaccurate and reported in many different ways,” Jorin Becker, 25, the eldest son of Arthur, tells Stab this morning from Costa Rica.

“I feel it’s important to share all the right info to the best of my knowledge. Hopefully one day my dad will be ready to share the full story from his own account.”

Arthur, Jorin and his younger brother, Avi, 20, have been traveling to Tamarindo for 14 years, and Jorin lived there for some time. “We’re from Boulder, Colorado, but my dad has a home in Tamarindo,” he says. “I did my junior year of high school there and lived with my dad during that time. Tamarindo is a small town and my dad’s about as close to a local as you can be, although he doesn’t live there full-time anymore.”

Croc attacks in Costa Rica are uncommon but not unheard of. Since 2013, there have been eight reported attacks in Costa Rica and two on surfers. Both occurred between Playa Grande and Tamarindo, the same location as Mr Becker’s. “There’s an estuary that splits the two beaches of Playa Grande and Playa Tamarindo,” says Jorin. “It’s an easy crossing that varies with the tides. At low tide you can walk across it and at max high tide it’s a two-to-four minute paddle. I’d say at least 25 people a day do the same trip back and forth; often a lot more during tourist season in Costa Rica.”

There are boat taxis that’ll transport people across the river mouth for a small fee. However, “it’s never really been an option that most surfers who cross that river mouth use,” says Jorin. “The paddle and short walk across makes for a nice warm up and is a pleasant experience.” The estuary is postcard gorgeous and is without much warning for crocs. “There may be one warning sign on the Playa Grande side, but if it’s still there, it’s just a small yellow sign with a crocodile silhouette.” According to an article on primeroenoticias.com, tourists usually go without warning to crocs in the area as tourism is Tamarindo’s largest earner. But, Arthur’s no tourist, and this happened during a routine crossing. “My dad has made that paddle thousands of times. It’s his favourite surf spot, and has been for years.”

“You understand crocs live in the estuary,” continues Jorin. “Although, they’re usually not where surfers cross, and you never expect to encounter one that would view a full size human as prey. I’ve heard of dogs being targeted but it’s not uncommon to see people swimming or cooling off in the water there. Until this happened, I personally had no fear of crocodiles in the estuary at all.”

The morning of the attack started like any other for Arthur; Just another dawn patrol with his friend and local surf instructor, Edgar Sanchez. They got down to the river mouth, and crossed the estuary to a spot in Playa Grande, had a surf and headed back across the river to Tamarindo. Edgar led the way; Arthur trailed. “It was the same morning high tide dawn patrol he and Edgar had been doing the past few days,” says Jorin, who talked to his dad just prior to the incident. “The attack started when my dad entered the water to paddle back across the river. The croc grabbed him by the right leg and brought him underwater. Edgar told me he heard splashes and yelling. When he turned around he could only see my dad’s board. Then Edgar paddled towards him and pulled him above water. Meanwhile my dad was fighting the croc; that was the first attack.”

This man battled the croc, twice, ripped its jaws from his face, lost a leg, but lives to tell the tale. 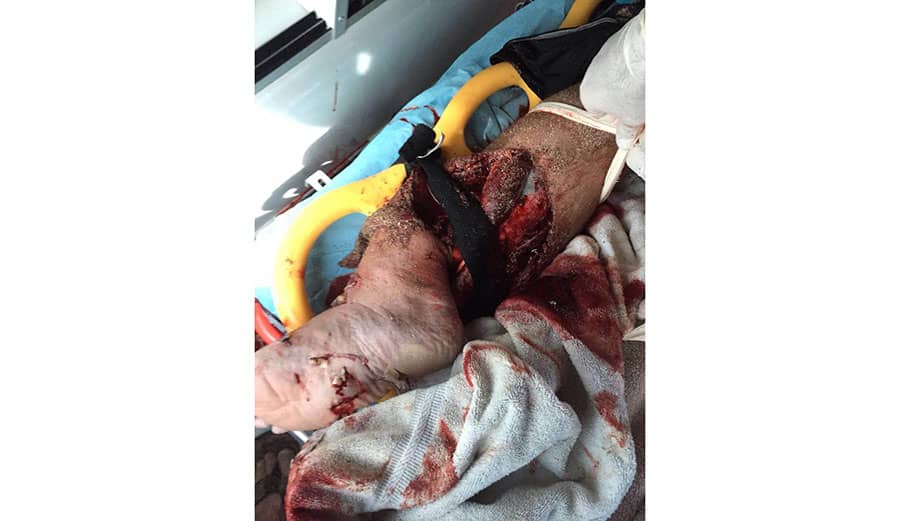 “He was able to break free and tried to swim away towards his board and back to safety,” continues Jorin. By the looks of Arthur’s leg in the aftermath, the croc clamped down, initiated a “death roll” and lost its grip, or let go with hopes to finish the job. “Then the crocodile made another attack, this time it popped up in front of him and Edgar, biting him on his face and neck. In the video you can actually see my dad rip the croc off of him and it splashing in the water.

To see the video click the link to Stab Magazine, and the video is at the top of the page: Croc Attack Video.

That was the last attack; afterwards the croc swam away. My dad said he got plenty of good punches in on the croc but it felt like he was hitting something too hard to do any real damage. In my opinion, his fight was enough. I can’t think of anyone on the planet who I’d pick to win a fight against what’s basically still a dinosaur, in its environment, other than my dad. He kicked his ass, if I’m judging.”

After losing his right leg, hundreds of stitches sealing countless cuts and bruised skin across his hands and arms, stitches on his face, neck and a broken nose, Arthur is in a stable condition. “He is doing amazingly well considering the severity of the attack,” says Jorin, who along with Avi joined him after landing in Costa Rica the same afternoon as the attack. “All his injuries are healing well. He is talking to family members, engaging with us and the doctors, and yesterday was moved from the ICU to his own room.”

“He is the strongest man on the planet right now,” says Jorin. “He’ll be out of the hospital well before anyone expects.” 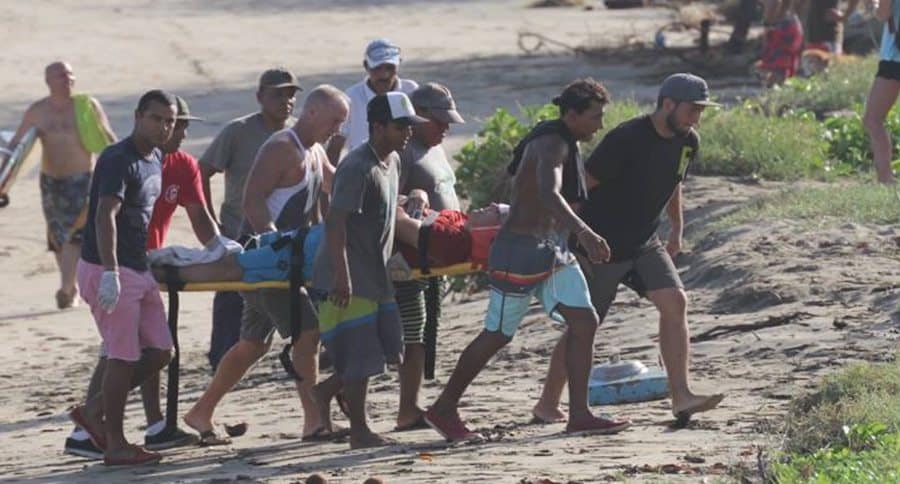