In an odd discovery, a ship dating back to the mid-to-late 1800s was unearthed by construction workers from about 25 feet underground in Boston’s Seaport District.

The bizarre find of an over 50 foot long wooden sloop is being inspected by archaeologists after Shanska, the construction company that found it, informed city officials of the rare underground discovery.

“This is the first shipwreck that I know of in Boston discovered in filled land,” City archaeologist Joe Bagley told WBZ-TV. “This is the largest and most significant by far.”

The ship looks to have been carrying barrels of lime, which was used in masonry and construction, according to Bagley. 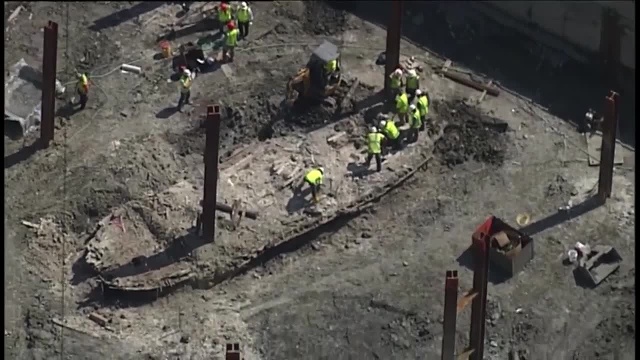 “You certainly come across a lot of interesting things when you do below-grade excavation, but I’ve never seen anything like this in my career,” said Skanska president and CEO Shawn Hurley. “I can say in my entire career I’ve never come across an artifact.”

It’s believed the ship must have run aground, potentially during a storm, in an area that used to be known as Dorchester Flats. Most of the cargo on board is believed to have been unloaded by the crew before they set part of the ship on fire to reduce its weight.