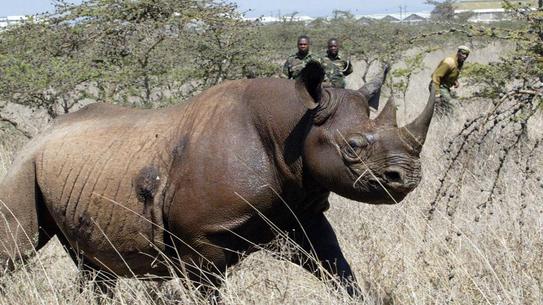 Since 2012, Namibia has sold licences each year to kill individual rhinos, saying the money is essential to fund conservation projects and anti-poaching protection.

An American hunter last year paid $US350,000 ($475,000) to shoot one of the beasts with a high-powered rifle, with government officials on hand to ensure he killed the correct animal.

It said the only rhinos selected for the hunts were old individuals that no longer breed and that posed a threat to younger rhinos.

On Friday, the environment ministry advertised three black rhinos available for the hunting season which ends in November.

The advertisement offered discounts to Namibian-owned companies or those employing a Namibian-registered professional hunter.

“As a country we have our own legislation and we are not doing anything contrary to any law,” he said.

“As a matter of fact, our constitution allows us to empower our own people.

“We are hoping to get enough money from this auction but we also do not want it to be controversial like in the past.”

In neighbouring South Africa nearly 1,200 rhinos were killed by poachers last year in a slaughter driven by demand for powdered rhino horn in some Asian countries, where it is seen as medicinal.

Nightmarish Pile of Water Moccasins Claim Boat as Their Own